The Importance of Maintaining Mother Tongue

While studying in English at an international school, maintaining your children’s mother tongue can prove challenging, but is absolutely possible when they are provided with the right tools inside and outside the classroom.

To learn more about why it is important to maintain one’s mother tongue, we spoke to Noriko Partridge, Mother Tongue Lead and Japanese Teacher at NIS.


Why Is It Important to Maintain Native Language?

At Nagoya International School (NIS), we understand the importance of mother tongue, the importance of language in learning and the role each plays in child development. This is why we incorporate this into our curriculum at all stages and age groups.

With many documented long and short term benefits of helping your children maintain their mother tongue, it’s important to seek out an international school that can provide them with the ability to maintain their home language while learning in an English speaking environment.

There have been numerous studies looking into the link between language acquisition and the development of essential academic skills, such as critical thinking and enhanced literacy skills.

It can be a challenge to teach “abstract skills” via a second language, but when there is already an understanding and a connection to the subject matter in a child’s mother tongue, you will find they are better able to master challenging skills and concepts more effectively and efficiently.

By helping your child with maintaining Japanese mother tongue, your children will experience these benefits throughout their lives.

“This power [of the mother tongue] helps the cycle of communication skills, researching, thinking, analyzing, hypothesizing, consolidating the ideas, and lastly producing and outputting one’s ideas into the community,” said Partridge.

“As the community language in NIS is English, for those whose mother tongue is not English, this communication cycle in their first language will boost their ideas by breaking the wall of the language differences.”

2. Stronger Connection to Your Culture

When your children learn in their mother tongue, they are continuously maintaining a connection to their native culture, which will not only benefit them academically, but also mentally and socially.

“We are aiming to help our students become effective communicators by obtaining one or more additional languages within themselves. Language learning supports the development of intercultural understanding and respect, as well as appreciation of one's own language and culture,” said Partridge.

Studies have shown that children maintaining a connection to their culture via home language positively affects their mental health, reduces stress, and strengthens connections with others.

When your children have already developed their multilingual skills, picking up new languages comes to them with increased confidence and ease.

Some studies have shown that adults who have learned a second language, particularly those who have learned at least two before the age of five, have denser grey matter in the left hemisphere of their brain, which is the section responsible for language and communication.

Studies have found that multilingual children enjoy a higher socioeconomic status than their monolingual peers, and are also more likely to earn a higher salary.

By embracing a student’s mother tongue while also studying in English, you are setting your children up for success.

“The power of generating ideas and communication also helps children express themselves, which gives them an opportunity to discover who they are,” said Partridge. “They re-recognize their identity and regain their confidence by opening themselves up to their community.”

By choosing an international school that values maintaining mother tongue, your children will benefit from their multilingual skills throughout their entire lives.

At NIS we recognize the importance of maintaining mother tongue in education. Not only will your children experience the short term benefits of improved academic performance and ease in mastering new languages, but maintaining a strong connection with their culture will benefit them long into adulthood, as will the increased socioeconomic benefits associated with bilingualism. 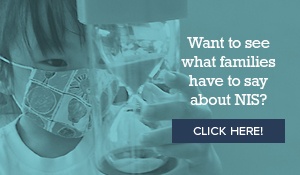 Did you know what you wanted to do growing up? Maybe some of you did, but we didn’t. How do we...

Looking Back, Striving Forward: Educating During a Pandemic