Language is the connective tissue of a community. It is the means by which we communicate with others, share our thoughts and feelings, and connect to our shared heritages.

How Does Language Influence Multicultural Identity?

At Nagoya International School (NIS), we have taken this to heart, and actively navigate between cultures and identities. We do this so our students can learn to find, nurture, and embrace all aspects of their identity, and enhance the existing benefits of having multiple cultural identities.

That being said, you may be wondering - how are language and identity connected? And how can language influence and shape one’s identity? At NIS, we utilize a number of well-researched methodologies to teach these valuable life skills. Each one has been shown to directly benefit the promotion of language development as well as helps all our students embrace their multicultural identities.

English occupies a unique position in the landscape of languages. For many students English is the gateway to further studies and career opportunities.

Acknowledging the advantage it grants to the speaker, we help students develop their communication skills in English. Having said that, we also work towards creating a school culture where English is not seen as the measure of one’s intelligence and achievement.

When students struggle to communicate in English, they feel less confident in their academic abilities. Through events like International Mother Language Day and adoption of translanguaging pedagogy, we attempt to eliminate this hierarchy of language. We create opportunities for young people to claim English language as their own and use it in their own way; make it a part of their cultural experience.

We prepare students to use English confidently, but at the same time, we teach them ways in which they can not only utilize but celebrate their home language to find academic and personal success.

Translanguaging is a pedagogical approach with an emphasis on the process of meaning- and sense-making for people with more than one language ability.  As an international school filled with children and their various mother tongues and language skills, this benefits all of our students regardless of what language(s) they walk through the door with.

Normalizing translanguaging practices in the classrooms and among students is just one of the ways we use language to shape identity; translanguaging allows for a non-judgmental and creative space to learn and use different languages. It allows students to employ their home language to research, have conversations about meaning, context, and even the purpose of using a language. This allows them to be creative, and find confidence in their identities as multilingual learners. You can learn more about this approach here.

Some of the ways in which we encourage translanguaging is through code-switching and code-mixing.

At NIS we ground our approach to code-switching with translanguaging as the theoretical support for that approach. In a linguistic and multicultural context, code-switching not only means switching between languages, but inhabiting different personas depending on the audience. When multilingual learners code switch, they dip in and out of languages, cultures, and experiences. Their mannerism, body language, tone of formality, and ways of being change depending on the cultural group they inhabit. This process happens organically and is not dependent on being multilingual. Code-switching is one of the ways language influences identity and even shapes it.

“By [code-switching], you’re saying that both of these languages are equally important to me, and that this is a particular emotion or feeling that I can best express in my own language,” said Secondary EAL teacher Tulika Bathija.

The importance of code-switching is noted particularly in students with a multicultural identity who may speak English as an additional language; they find a sense of solidarity among their peers when using their mother tongue to enhance their study of English, rather than hinder it, and is indicative of how language can affect identity.

Those who speak multiple languages code-switch subconsciously, oftentimes when they know a word in one language but not in the other, and substitute the word in a conversation. Code-switching in education helps create meaning while learning, as a student can attribute new knowledge and merge it with their existing knowledge base, benefiting both languages at once. This further contributes to the development of one’s multicultural identity.

Translanguaging teaching strategies like code-switching can be incorporated into the classroom in many ways. Bathija does so by introducing her students to texts originally written in the home language(s) of her students and then translated into English.

By doing so, her students learn from international perspectives and not solely from those who speak and write in English. By researching topics in different languages, students are introduced to different perspectives and we find this leads to rich classroom discussions.

“We’re recognizing that there’s not just one way to look at a situation, different cultures are going to think about it differently and that’s all valued,” said Reid Pierce, Secondary EAL Teacher.

Code-mixing occurs in bilingual spaces where users of both languages comfortably mix two languages in their speech or writing to create meaning or use language creatively. When people code mix English and another language, it does not imply lack of fluency. What it means is that users of both languages share a relationship that allows them to mix words and phrases to enhance their communication. An example of code-mixing being used in a classroom is from Bathija who encourages students to code mix in their blogs, where they can write a term in their home language using the English alphabet and put the English meaning in brackets.

“By using the two languages side-by-side, this is a celebration of both parts of your identity, and your academic language that you’re acquiring at school, as well as the language that you speak at home,” said Bathija.

Encouraging code-switching and code-mixing are just some of the ways we celebrate diversity and help our students find, embrace, and nurture their multicultural identity and is demonstrative of how language and identity are connected. 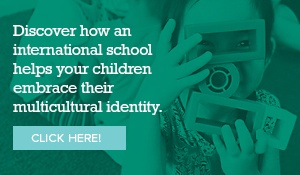 What is Translanguaging and Why We Celebrate It | NIS

It is not uncommon to hear around any given dinner table of a bi-cultural English/Japanese family,...

How Does Multilingualism Affect Education? | NIS

Speaking more than one language offers your children a great advantage in many areas of their...

As parents of multicultural children, it’s important that the school you choose will embrace and...