Have you ever had a conversation with a friend who has different beliefs than your own? Maybe you feel as though that friend shrugs off the well-crafted facts, statistics, and reasoned arguments you've presented to them. "How frustrating!" you might think, "I'm being rational. Why isn't this person listening to what I'm saying?" One of the reasons it's so hard to change people's minds is because people perceive the world through heuristics--mental shortcuts that use our previous experiences and assumptions to make decisions quickly. Heuristics - and affective heuristics - which draw upon our emotional memory to make decisions, in particular, are very important. We have to make thousands of decisions each day, and if we had to consider every one of them seriously, we would be exhausted. Heuristics allow us to process the world quickly and effectively, dismissing information we find either irrelevant, unhelpful, or unworthy.

What societal structures help contribute to these heuristics? Social groups provide frameworks to view the world, a set of heuristics to help us comprehend a complex and often scary place. Nobody really has the expertise or knowledge to examine every little piece of detail or study, so we rely on the general knowledge of the overarching group to help us make decisions. We often think of the pejorative phrase "group think" when describing this phenomenon, but it's actually important. Our societal willingness to trust doctors allows them to use their expertise to keep us healthy. As the connotations behind the word "group think" imply, however, relying on the group to help us make decisions can lead us to some pretty bad ideas and possibly harmful outcomes. We need only look back at the history of the last century to find examples of when "group think" has gone wrong.

So how do people walk away from their ideas? How can you convince your friend to change their mind? What causes people to walk away from group think inherently nurtured in their institutions, framing their decision making for years?

I do not have the answers to any of these questions, but the Gr. 12 students and I will inquire into these issues together.

Students will explore a variety of texts focused on how people change their minds. They will focus on a wide range of sources: People talking about their decision to leave religious institutions, advertisements for people suspicious of getting the COVID vaccine, and social science papers exploring people's relative willingness (or unwillingness) to change their opinions. Students will examine both the structure of these appeals and the claims and arguments they make.

These readings will allow us to access some incisive literary texts about the subject. We will read An Artist of the Floating World by Kazuo Ishiguro and watch Errol Morris's classic documentary The Fog of War together to better understand some of these issues. The novel focuses on Masuji Ono, a former Japanese war propagandist who struggles with his guilt over World War II. Ono proves to be an interesting character; he often misremembers events in his past to evade accountability and then relentlessly reflects on his previous role, taking responsibility for events he was not big enough to influence. Ono allows us to understand someone who largely has distanced themselves from their old worldview but still struggles to reckon with his actions. The Fog of War follows the reflections of controversial defense secretary Robert McNamara as he reflects on his role in World War II and the Vietnam War. McNamara alternately deflects, justifies, and expresses remorse for his role in the war--even at one point suggesting that he was a "war criminal." By exploring these texts, students will explore the difficulties people face when they recognize the consequences of their actions.

How about finding out more about inquiry-based learning at NIS? Hit the button below! 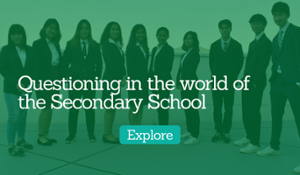 Virtual Self Portraits from Home | NIS

There are so many subjects that, at first glance, would seem difficult to teach in a virtual...

Two Gr. 11 students set out on a mission...to see what more they could do with their curiosity and...

Did you know what you wanted to do growing up? Maybe some of you did, but we didn’t. How do we...